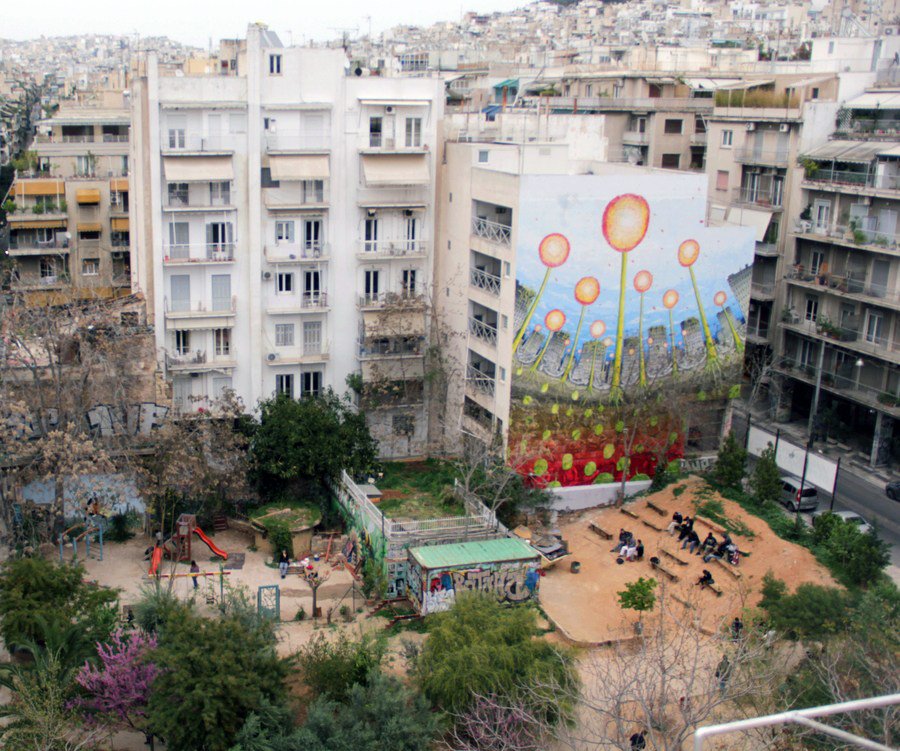 They paved paradise and put up a parking lot, as Joni Mitchell once sang. Located in the somewhat typecast “anarchist” Athens neighbourhood of Exarcheia, Navarinou Park exemplifies something of a reverse scenario. The initiators and users of Navarinou are not working with something so static or “complete” a state as paradise though; rather, they are attempting to sustain this rare patch of open space amidst the density of the Greek capital via an ongoing process of autonomy and self-management that is not without its challenges.

The site has had a variety of former lives since a clinic was built there in 1907; at one point intended to host a new public building, then a new city square, it instead became a car park in limbo. Its most recent metamorphosis as a piece of urban commons was set in motion following the riots of 2008 that took place in a number of Greek cities, which amplified the feelings of many regarding the country’s precarious economic situation and government corruption. As authorities attempted to curtail tensions, those seeking modes of resistance that didn’t entail rioting were compelled to consider what Italian anthropologist and activist Anna Giulia de la Puppa describes as “new ways of using public space, new experiments [regarding the] occupation of space.”

On March 7, 2009, the Exarcheia Residents’ Initiative, who had been working on ideas for the site for 18 months, and the collective Us, Here and Now and for All of Us initiated this particular experiment. Alongside local residents and supporters, they arrived at the car park armed with tools and began breaking into the cement and planting. Maintaining this commons ever since has highlighted that despite external misperceptions about Exarcheia, the principle conflict associated with the park is not about street fights but the perception of city space.

Hosting urban gardening schemes, community events (both political and cultural), as well as sport and leisure activities, Navarinou’s status lies somewhere between park and occupation – meaning that the dynamics of the responsibility that apply are distinct. Open, collective meetings take place every Wednesday evening at 7pm, in which no expressed idea is declined without discussion but with consensual decisions binding for all. Autonomy remains a process, not an end result here; a continuing practice of urban communing that fosters connectedness, centred around a space produced by people and used according to their needs and preferred forms of control.

In recent years, the words “urban” and “intervention” have increasingly been coupled together alongside that most ubiquitous of phrases: “pop up”. Whilst short-term tactics can be effective in their own right, it is the employment of intervention as a long-term – and evolving – strategy that really results in the effective, sustained involvement of residents in city making. Homebaked, in the Anfield district of Liverpool in the UK, is one such example of intervention taking place at a large scale, in terms of both duration and vision.

When Mitchell’s Bakery opened on a residential street corner in the neighbourhood (home to Liverpool FC’s stadium) in 1901, it was at the centre of a vibrant community. By 2010, thanks to multiple failures associated with wider regeneration plans for the city, the family-owned business had sold up and the empty bakery found itself marooned within a landscape of boarded up houses in the cross hairs of demolition trucks. That same year, Dutch artist Jeanne van Heeswijk, working with Manchester-based architects URBED, initiated the 2Up2Down project as part of a Liverpool Biennial commission, putting the notion of community autonomy centre stage.

Whilst the Biennial itself ran between September to November 2010, the 2Up2Down project ran for two a half years, during which time around 60 young people worked with the artist and architects and made use of the empty bakery space to devise a scheme of re-use for the premises and two adjoining terraced houses. In contrast to the top-down, birds’ eye view of the city’s regeneration plan, this model allowed for the completion of manageable, tangible achievements, demonstrating to participants the power of their own instrumentality whilst lending a sense of momentum for scaling up such efforts. 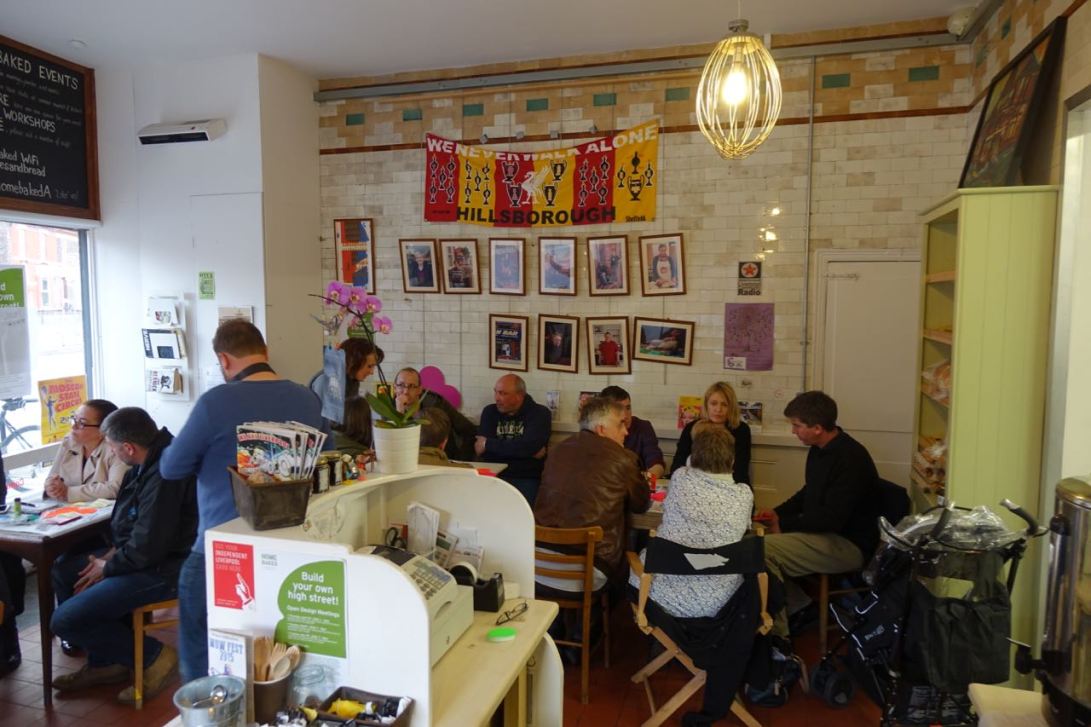 In 2012, the project found a new durational trajectory, when participants established the Homebaked Community Land Trust, a membership organisation that allows local people to collectively buy, develop and manage land and buildings (and which exists alongside the community-owned Homebaked Bakery Cooperative). The CLT then set its sights on extending the community-led intervention further into the wider cityscape.

In 2015, when the houses directly next door could not be saved, the group set in motion a project called “Build your own High Street”, underpinned by an extensive community-led design process. The community chose the architects, Architectural Emporium, and the resulting proposal is a scheme that includes 26 flats situated above shops on a community-led and owned high street development. The “brick by brick, loaf by loaf” approach will begin with the flat above the bakery. Once ready for occupancy in early 2018, this first step will allow the group to secure the council support and loans needed to build the scheme.

Homebaked is testament to the fact that whilst long-term interventions are undoubtedly complicated, it is precisely this quality that can bypass the reflex reactions of speculation-driven development, bestowing a value that goes beyond the purely financial.

These are excerpts from the book Explorations in Urban Practice – Urban School Ruhr Series, published by dpr-barcelona